A “murderer” cross to “holy” cross-the God of Roman Catholicism? Was there a transformation of the “cross” to holiness? With all due respect to Roman Catholics and believers on the image of the cross, the logical proposition is: ” Roman Catholic “Alleged” Church had introduced to this world the combined force of life and death. 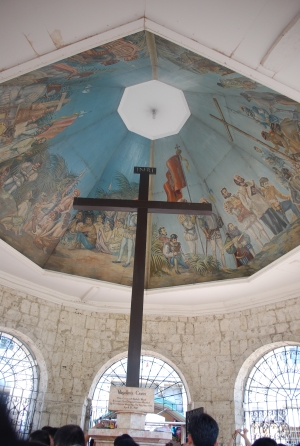 By calling it holy, the cross became potent in murdering bodies and souls. http://www.wordatthenet.com.-

These are the physical body of Christ and  the cross, in a single system of faith-the Roman Catholicism. As a force of death, cross was instrumental in the death of Christ”.

By comparison, Christ called the Father in heaven as “Father” but Roman Catholicism is calling the Father in Vatican City as “Holy Father”.

Also, the body of Christ is not being called holy but the cross became “holy”. Roman Catholicism called it “holy” cross. Hence, a killer became holy.

This ceremony spiritually put the image of the cross over and above “The name” considering that cross is only one and “The Name” being quoted pertains to three persons, thus, the cross, by way of a traditional deception, is being phrased  three time (3x) more than “The Name”.

Also, the symbolism in prayer has the semblance of alpha–omega or beginning-ending, which is being superficially understood by Roman Catholics as referring to Christ. But in practice, they are actually phrasing the “image of the cross” in prayer, which is never necessary when praying to the real Father in heaven and referring to the cross as the alpha-omega instead of Christ.

It was later discovered that this image is also in heaven. Thus, Roman Catholicism has its own specific God, who/which is in the image of the cross located also in heaven and followers are phrasing him/it three times (3x) more than the real God.

In fine, Roman Empire through the Roman Catholic Alleged Church was able to effectively deceive substantial believers to believe on and phrase the cross by using “The Name” of God in vain , which is  blasphemous. Thus,  the cross was consistent in murdering people and souls. It had murdered the body of Christ and early Christians before and for centuries, have been murdering bodies and souls of deceived believers.

“Crux/ˈkrʌks/ is the smallest of the 88 modern constellations, but is one of the most distinctive. Its name is Latin for cross, and it is dominated by a cross-shaped asterism that is commonly known as the Southern Cross“.

By aaphil in Religious Deception on December 28, 2013.
← God is with us, Vatican envoy tells Yolanda survivors Prayer by hypocrites and pagans →
%d bloggers like this: