Catholic’s cross and rosary are insults to God

Why are the cross and rosary considered as gross insults to God? Historically, the cross was introduced in 312 A.D by Constantine the Great, who was a Roman Emperor, while the rosary was introduced by St. Dominic at the time of the “Albigensian Crusade or Cathar Crusade (1209–1229), which  was a 20-year military campaign initiated by Pope Innocent III to eliminate Catharism in Languedoc, in the south of France. x x x “(Wikipedia). 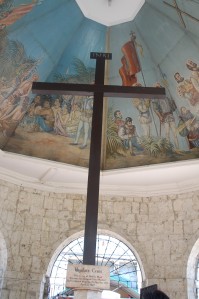 Cross is the supreme God of Roman Catholicism. http://www.wordatthenet.com

Both were later deceptively called ‘holy’ by the Roman Catholicism.

Crosscrucifix.com elaborated in its site:

The use of a physical cross as a sign and symbol emerged gradually in Christian practices.

While the theology of the cross is taught by Paul and the sign of the cross for baptism and protection is reported fairly early, the use of a physical cross rarely appears before the fourth century.(1)

At that time, two events involving Constantine led to the use of a physical cross or cross form by the state, the emerging church, and Christians.

In the first event, Constantine reports having a vision of a sign, either while sleeping or seen in the sky, that came to be identified with Christ. With the vision and dream he saw the words, In Hoc Signo Vinces, “In this sign conquer”, and assured his victory over Maxentius. He placed the sign at the top of his standard and on the shields of his men and won the battle of Milvian Bridge outside of Rome in 312. (2)This victory made Constantine the emperor of the West. He surprised everyone by openly supporting Christianity.(3)

This sign, a Chi Rho, one of the monograms standing for the word Christ in Greek (XPIETOE), replaced the eagle as the military standard for the legions of the Roman Army. Known as the labarum, a term of unknown origin, over time this sign was gradually replaced by the cross.

The second event is the legend of the discovery of the original cross of Christ by Constantine’s mother, Helena.

“It was only in the year 1214, however, that the Church received the Rosary in its present form and according to the method we use today. It was given to the Church by St. Dominic, who had received it from the Blessed Virgin as a means of converting the Albigensians and other sinners.

What is wrong with the cross and the rosary?

Notably, the physical cross that is placed at the altar of the alleged church, where Roman Catholics are kneeling towards and focusing to pray, is nothing but a carved image in the likeness of the southern cross, which is a small constellation located in heaven. Also, the rosary beads and strings being used in the rosary are carved images of things that could be seen in earth or in the water under the earth.

When God said no to images, Roman Catholicism did exactly the opposite. Worst, it did not only use the name of God in vain to cross and rosary images but also indoctrinated followers to kneel before the cross, which is a great disrespect because His Name is being used. That being the case,  Roman Catholicism is clearly grossly insulting God by using the cross and rosary.

By aaphil in Religious Deception on April 11, 2014.
← Philippines in Habakkuk 2 doom judgment Pope is not seeking pardon for idolatry? →

Leave a Reply to Identity of his Church: ‘Not among the existing Churches’ « WORDatTheNet Cancel reply