After leading Roman Catholics and this world to kneel before the cross and images of alleged Mother Mary, Jesus Christ and the saints, which is idolatrous and in violation of God’s commandments, Popes John XXIII and John Paul II will be canonized as saints, this month. 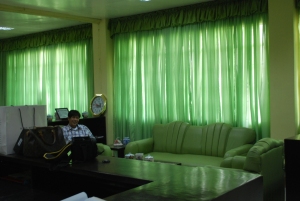 You can not see outside when your mind as a proverbial window is closed. http://www.wordatthenet.com

Above images are also at the altar of churches (otherwise known as Roman Catholic buildings or cathedral, etc.), where Roman Catholics were taught to kneel before them as they are facing the said altar to pray. This is especially true during masses as those attending are being doctrinally taught to kneel as part of the ceremony.

Also, traditionally, Roman Catholics and substantial numbers of Christians were converted to ‘cross believers’, not as God believers. It happened  when cross was adopted by Roman Catholicism as symbol of Christianity at the behest of Emperor Constantine the Great and his group. Apparently, this tradition was maintained by these two popes during their incumbency.

Logically, therefore, the publisher does not see any reason why  the Popes who are logically idolaters are to be elevated to sainthood, if saint is understood to be someone who obeyed and/or continued to obey God’s commandments.

In the same manner that he can not see any logic of elevating the status of the rosary and the cross to holiness by calling them, respectively, as ‘holy rosary’ and ‘holy cross’.

Readers, yours is the decision- whether you will allow yourself to be deceived or to consider further digging some facts to validly say whether or not the pope or anybody, who are idolaters, are entitled to be saints.

Quoted for reference is a related article published in gmanetwork.com:

VATICAN CITY – Pope Francis aims to unite conservative and reformist strands of Catholicism with the first canonization of two popes this month—an impressive masterstroke that has already stirred dissent in some quarters.

Conferring sainthood on John XXIII and John Paul II means bringing together two distinct schools of thought on what a pope should be—a humble parish priest figure or a globetrotting, charismatic superstar.

John Allen, a Vatican affairs expert at the Boston Globe in the United States, has written that the joint canonization shows Francis’s “inclusive spirit”.

“Francis is speaking not just to the outside world but to rival camps within the Catholic fold who see John XXIII and John Paul II as their heroes—meaning liberals and conservatives, respectively,” he said.

Just a few months into his reign, Francis broke with tradition last year by dramatically propelling the canonization case for John XXIII—known as “Good Pope John” and a pontiff with whom he shares similarities.

Less widely known than Poland’s Karol Wojtyla, Italy’s Angelo Roncalli played a key role in modernizing Catholicism in the 1960s and to this day inspires progressives who want a more down-to-earth Church.

The two popes will be canonized together in St Peter’s Basilica on April 27, with many pilgrims—anything from hundreds of thousands to a few million—expected.

By aaphil in Religious Deception on April 14, 2014.
← Pope asks pardon for alleged rapist priest? ‘Blood Moon’, His coming and punishments →