The Philippine Institute of Volcanology and Seismology warned that if a 7.2 earthquake hits the National Capital Region, Metro Manila and nearby provinces may be isolated due to collapsed roads and buildings. This assessment was reported in The Philippine Star News last June 17, 2014. 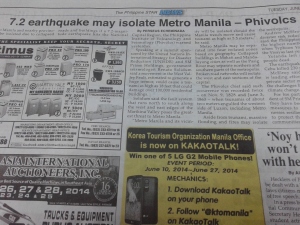 The report alleges that: “The fault system that runs north to south along the west and east edges of the Marikina Valley poses a greatest threat to metro manila”.

Also, Renato Solidum, who is a government seismologist, was quoted in the report saying  that movement in the said the West Valley fault is estimated to generate a huge tremor, which could cause tsunami as high as 18 feet that could damage over 100,000 residential buildings.

Is there a reason to fear for 7.2 earthquake in Metro Manila?

The answer is yes. But the public has to wait first for the worst earthquake in Cebu City before fearing for what will happen to  National Capital Region. The causes for the events is Roman Catholicism idolatry through Magellan’s cross and Sto. Nino in Cebu City and Black Nazarene in Quaipo, Manila combined with ‘oral sex’ mentality through the Reproductive Health Law and eating uncooked meat (kumakain ng hilaw na karne), which are all unacceptable to the Creator.

Taking note that idolatry was the major cause for Israelites’ punishments and ‘oral sex’ mentality, which is also present in same-sex marriage, was the root cause for the destruction of Sodom and Gomorrah,  worst scenarios are to be expected because said causes are now in combination in some parts of the world, including the Philippines.

To stress, the earthquake fault systems, which are more understood scientifically, are merely physical manifestations or warning of coming spiritual  events, which may be manifested only through massive deaths  in calamities and destructions.

It is thus pragmatic to believe that fault systems are divine warnings, which everybody must be aware of in order to behave prudently for purposes of preventing the incoming destructions.

By aaphil in Prophecy on June 20, 2014.
← Lord’s Prayer in Catholic mass is reversed Mafia excommunication by Pope is not helpful →