The ‘Jesus is God’ doctrine by Christians is blasphemous because it proposes that Jesus, who is a historically fictitious person created by King James in his contaminated bible, is God. To stress, such belief is a gross insult to the true God.

Also, the doctrine is false because Christ himself, who happened to be  falsely called as Jesus, expressly referred to the Father in heaven as God, without expressly claiming for himself that he is also God.

In short, there is no valid historical and scriptural basis to say that ‘Jesus is God’.

Allegedly, the transliterated name Jesus is based on the alleged Greek translation of the Aramaic/Hebrew name of Christ. But as may be noted, what obviously comes out in the Greek translation and, finally, in English transliteration of the name, is rendering Christ’s Hebrew name as a name of the past, at the same time,  replacing it with a pseudonym, which is bearing the root name of pagan god Zeus.

As may be traced therefore in the translation and transliteration of the name of Christ, the Greek language and civilization through the Roman Empire had played a major role in influencing its final outcome. This is manifested by insertion in the alleged Aramaic/Hebrew translation Ἰησοῦς (Iēsous) of the name of Zeus, who was considered by the Greeks and Romans as God.

In using the Greek translation instead, clearly, there was bad faith, because just like the current bible scholars, King James had the opportunity to search for the original name of Christ as basis for the transliteration. At that time, his choice is between the original name on one hand and the translated name on the other hand. But he opted for the alleged translated name instead.

Also, based on the above, the alleged Greek translation and the transliteration of the Greek translated Aramaic/Hebrew name had, in effect, treated the original name of Christ not consistent to his true nature as eternal and had hidden his true name, which is a manifestation of deception by Roman Catholicism.

“Originally, the name of the Messiah was

, pronounced Yahushua. This is the Messiah’s original name. When the Gentiles tried to transliterate His name into Greek, they came up with ihsoun or “Iesous”. But originally, this word was from #3091 in the Hebrew which is

. When Iesous was transliterated into Latin, it became “Iesus”, which was then carried over into English it became our modern day “Jesus” when the letter “J” developed.”

On the other hand, hebrew4christians.com in Codex Sinaticus countered the above allegation, as follows: 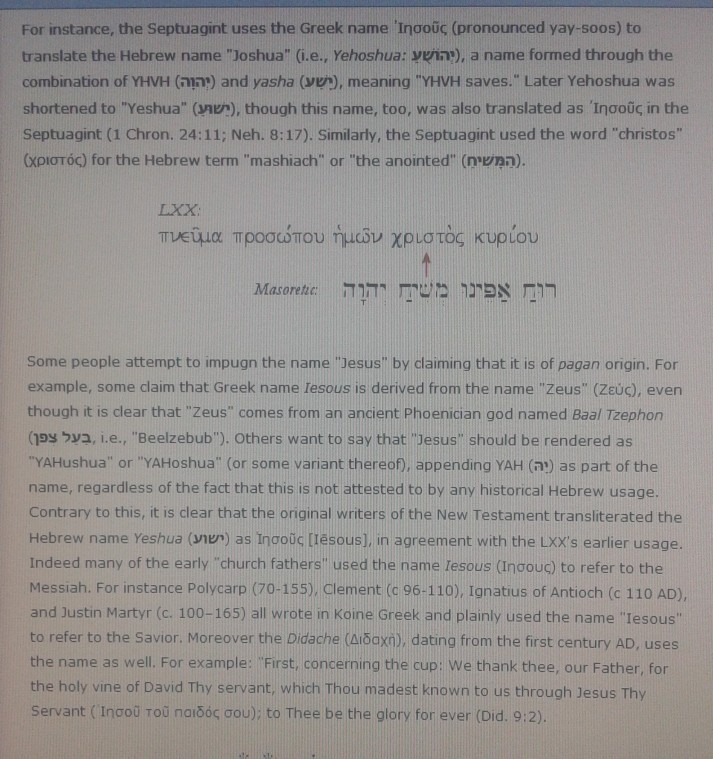 Based on the above, the anti-Jesus and pro-Jesus proponents are in agreement that the name Jesus evolved from a Greek name but differs on alleged Hebrew or Aramaic origin. Also, while eliyah.com opines on the pronunciation of the original name of Christ in Hebrew is Yahushua, the pro-Jesus proponent opines that the Hebrew name of Christ is Yeshua that was allegedly translated to Greek name Ἰησοῦς (Iēsous) then to Latin “Iesus”.  Hence, consequently, both had, in effect, admitted that no Jesus had ever existed before the name was created by King James. Plain and simple therefore, the name Jesus that is being revered by Christians is fake and fictitious and just a product of religious deception.

Also, notice that the deception does not end up only in the hiding of the true name and identity of Christ but ultimately, the replacement of the true God by false god in the followers’ belief. This is because the ‘Jesus is God’ doctrine that is being proliferated by Christians has ultimate effect of making pagan god Zeus as god in the belief system of Christians

In conclusion therefore, if you invoke the name Jesus, which is a fictitious name, in your prayers, you consequently consider by faith pagan god Zeus as your heavenly Father, which is blasphemy. For those who are not conscious of what a blasphemy is, quoted is the definition from  Wikipedia, which defines the term as “the act of insulting or showing contempt or lack of reverence for deities, to religious or holy persons or things, or toward something considered sacred or inviolable.”

By aaphil in Religious Deception on December 3, 2014.
← ‘Jesus is Christ’ doctrine is a big traditional lie Christianity in general is a satanic cult →