Home » Religious Deception » In the Kingdoms of Christianity, the one-eyed is the King

In the Kingdoms of Christianity, the one-eyed is the King 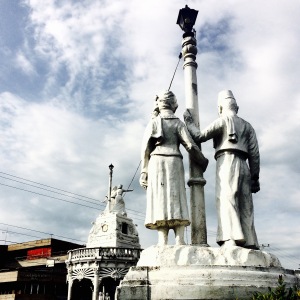 In the kingdom of the blind, the one-eyed is the king. It is true also to various kingdoms of Christianity. They are blind because they can not see that only one sect of the many sects may be a true believer of God and the rest are lying, as there is no logical reason to have various sects if they are believing only on the same God. In short, Christianity or Christendom, if taken as a whole, is a confused belief system.

Also, they are blind because they can not see that their belief in Jesus Christ is merely delusional as there was no Jesus name that ever existed when the messiah was here on earth. And speaking of delusion, this is found in 2 Thessalonians 2:11 in relation to the previous verse, which states:

10 And with all deceivableness of unrighteousness in them that perish; because they received not the love of the truth, that they might be saved.

11 And for this cause God shall send them strong delusion, that they should believe a lie: (KJV)

Accordingly, aside from the two circumstances stated above about the belief on a particular sect over the others and belief in fictitious name Jesus, the delusions of believing in lies are also enumerated, among others, as follows:

1. Praising a Jesus name, which did not ever exist when the messiah was here on earth, coupled with  belief in such evolving name, e.g from Greek Iesus to English Jesus, as if the Darwinian theory of evolution is also applicable to it;

2. Making the trinity of lies in Jesus Christ as the way, the truth and the life;

4. Believing on the image of Cesare Borgia as the one crucified but in truth he died in an ambush, after receiving a fatal injury from a spear and was afterwards stripped of luxurious garments, valuables and a leather mask covering half his face (disfigured possibly by syphilis during his late years) and finally, left lying naked, with just a red tile covering his genitals.

5. Believing and kneeling of Catholics before the cross that is usually located  in the altar;

6. Believing on statue as alive or can heal or can do a miracle;

7. Making the contaminated bible, where the name of the heavenly Father and the Son are no longer traceable to be of Hebrew origin, as holy;

7. Believing on Popes as infallible;

8. Enriching the lying Christian false teachers through tithes while poor people are suffering;

9. To be impregnated by priests and pastors;

10. To be sexually abused by pedophile priests;

11. The act of invoking the fictitious name Jesus as God to motivate violence in religious wars; and

12. Worst, instead of believing on the Sabbath law,  doing Sun worshiping during Sundays after the law  promulgated by Emperor Constantine.

If you notice, all the enumerated practices and belief systems were not scripturally taught in Hebrew, which teachings, if the believers are interested, can be traced from Israelites’ tradition.  Instead of seeking the truth, they blindly believe on them as if they are the truth. In fact, less likely that they would defend their beliefs logically but by force to sustain the lies. That being so, all of them are operationally blind because they  refuse to see the truth, which is a sign of strong delusion in them, where lies are comfortable more than the truth. Also, their leaders are likewise blind as they are actually blinded by the riches that could be generated from the believers’ blindness.

By aaphil in Religious Deception on January 4, 2018.
← Sunday church goers are avid followers of Emperor Constantine Who is the real author of Catholicism and present Christianity? →