Home » His Coming » What is the name of the Father?

What is the name of the Father? 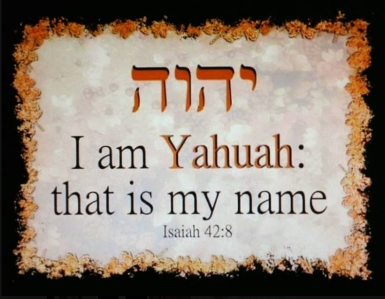 Adults have confusing views on the personal name of the Father. Some says Yahweh, some alleges Jehovah, some calls Him through a title Lord, God, Adonai or Elohim. If you notice, almost everybody has his own way of naming the heavenly Father. And they are not aware that, in addition to the initial “Yah” sound in Hallelu-YAH or “Praise Yah” that is stated in Revelation 19, the last sound of the name of the Father is heard in a newborn’s cry. In essence, if anyone could only ask the newborn about the name of the Father, he or she will answer, correctly, half of it, more than the adults or differently from what is being taught to adults.

Also, the  ‘UHA cry’ in newborn is not affected by languages, in fact, it is universally heard by people, with varying languages. Thus, the opinion stating that His name  would depend on the language of an individual is not, at all, reasonable and logical. as the sound ‘Yah’ in ‘Hallelu-YAH’ in Revelation 19 and ‘UHA’ even exist in non-Hebrew languages. It is therefore also reasonable to say that languages, which are not  in the lingua of a newborn, can confuse the understanding of people, especially in English language, where one word may mean differently according to use, which was taken advantage  by deceivers, to hide the name the Father and the son, even in the bible.

When hearing the ‘UHA cry’ in a newborn, it appears, by instinct, that he or she is calling and acknowledging, through his cry, the Father, who is the source of life, at birth. This is not true, however, to adults, as most of them refuse or fail to acknowledge the name of the Father. It is because, they were taught to acknowledge the name of false god Jesus or other false gods, depending on religious belief. They may even preach the name of their false god by falsely declaring them worthy of praise and worship.

Scripture describes the ‘UHA’ sound coming from the lips of nursing infants in Matthew 21:16, as follows:

16 and said to him, “Do you hear what they are saying?” Yahushua () said to them, “Yes. Have you never read, ‘Out of the mouths of children and nursing infants you have prepared praise for yourself’?”(New English Translation (NET) revised).

How was the name of the Father, which is also reflected in the name of the son, suppressed or put in vain by writers in the past, which is now inherited by new generation, who are compelled to subscribed to fictitious name Jesus? One-it is through the alleged translation of the Hebrew scripture to Koine Greek in a document, what is now called as Septuagint. Two-by the introduction of the name Jesus Christ in Christendom. And third, by the different versions of the bible, which created confusion on the exact transliteration of the name.

As a result, Catholicism, Orthodox belief and Christianity, as a whole, became nothing but the most confused and blasphemous bodies of believers, as they do not know His personal name and believing instead on a name Jesus Christ, which was not even heard when the messiah was here on earth. They are blasphemous because they opportunistically use the ‘words’ of the Father to worship a false god. Worst, they even invoke or believers would even invoke the guide of the Holy Spirit, when the substance of their belief can not be justified to be true, at all, because, everything in their belief is connected to a false name, hence, they are all false or un-true.

Some foolish believers would even philosophically allege that “What is in a name, when one is after the wishes of the Father?” Notice, however, that said alibi is merely purposely intended to justify the ‘Jesus Christ’ lie, which was just a creation, to totally replace the name of the Father and the son or the truth about the Father in the minds of people, and nothing more. This act is prophetically described in Romans 1:25, which states:

“25 They exchanged God’s truth for a lie and worshipped and served the creation rather than the Creator, who is blessed forever. Amen.” (ISV)

Finally, coming out as promised in the scripture, the name of the Father is discussed in the video below, which is transliterated to Yahuah, the short name ‘Yah’ in Hallelu-Yah or ‘praise Yah’, being completed by the sound of life ‘UHA’ in a newborn’s cry. Also, as life is also manifested in the name of the son, his name as what was revealed in the old testament is ‘Yahushua’, more specifically through Zechariah 6:12 in relation to Zechariah 6:11 that was erroneously transliterated to Joshua, which also bears the sound of life ‘UHA’.

The Greatest in the Kingdom of Heaven

18 At that time the disciples came to Yahushua () and asked, “Who, then, is the greatest in the kingdom of heaven?”

2 He called a little child to him, and placed the child among them. 3 And he said: “Truly I tell you, unless you change and become like little children, you will never enter the kingdom of heaven. 4 Therefore, whoever takes the lowly position of this child is the greatest in the kingdom of heaven. 5 And whoever welcomes one such child in my name welcomes me. (Matthew 18:1-5)

13 People were bringing little children to Yahushua () for him to place his hands on them, but the disciples rebuked them. 14 When Yahushua () saw this, he was indignant. He said to them, “Let the little children come to me, and do not hinder them, for the kingdom of God belongs to such as these. 15 Truly I tell you, anyone who will not receive the kingdom of God like a little child will never enter it.” 16 And he took the children in his arms, placed his hands on them and blessed them. (Mark 10:13-16)

13 Then people brought little children to Yahushua () for him to place his hands on them and pray for them. But the disciples rebuked them.

15 People were also bringing babies to Yahushua ( for him to place his hands on them. When the disciples saw this, they rebuked them. 16 But Yahushua () called the children to him and said, “Let the little children come to me, and do not hinder them, for the kingdom of God belongs to such as these. 17 Truly I tell you, anyone who will not receive the kingdom of God like a little child will never enter it.” (Luke 18:15-17)

The Parable of the Wandering Sheep

10 “See that you do not despise one of these little ones. For I tell you that their angels in heaven always see the face of my Father in heaven. (Matthew 18:10)

46 An argument started among the disciples as to which of them would be the greatest. 47 Yahushua  (), knowing their thoughts, took a little child and had him stand beside him.(Luke 9:46-47)

– – – – –
35 Sitting down, Yahushua () called the Twelve and said, “Anyone who wants to be first must be the very last, and the servant of all.” 36 He took a little child whom he placed among them. Taking the child in his arms, he said to them, 37 “Whoever welcomes one of these little children in my name welcomes me; and whoever welcomes me does not welcome me but the one who sent me.”(Mark 9:35-37)

3Children are a heritage from the Lord, offspring a reward from him. 4Like arrows in the hands of a warrior are children born in one’s youth. 5 Blessed is the man whose quiver is full of them. They will not be put to shame when they contend with their opponents in court. (Psalm 127:3-5)

By aaphil in His Coming on February 20, 2018.
← Holy Spirit or spirit of Emperor Constantine? Shocking truth about ‘Jesus Christ’ name →