Home » The Word » Yahushua: The Only Way to the Father

Yahushua: The Only Way to the Father 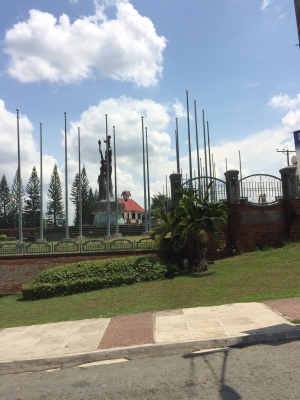 Cloud and the park

Based on historical facts, no Jesus name ever existed, when the messiah was here in earth. Hence, despite it is written in the bible and strong delusions of professing biblical scholars, the rejection of Jesus Christ name as the only way to the Father is justified, because, spiritually, the Jesus Christ entity is virtually impossible to have existed, when the messiah was here on earth. What is then the name of the right way to the eternal Father? The applicable verses in this case is John 14:6-7, stating that:

11Then take some silver and gold to make a crown and set it on the head of Yahushua () son of Jehozadak, the high priest. 12 Then say to him, ‘The Lord who rules over all says, “Look – here is the man whose name is Branch, who will sprout up from his place and build the temple of the Lord.(Zechariah 6:11-12, NET bible Revised)

Before discussing the “The Only Way to the Father“, let’s review the “What’s in a Jewish or Greek-Roman Name” sub-article, which is the first sequel of the article entitled “Shocking truth about ‘Jesus Christ’ name“. Jews and Greeks and Romans in the first sequel are noted to traditionally adopt theophoric names, where the name of their respective god is reflected in the name of their child to reflect the beliefs and acts of acknowledging and honoring their god. It is also noted that Jews and Israelites are believers of only one God while Greeks and Romans are believers of numerous pagan gods.

The invalidity of Jesus name in the English language was also discussed vis-a-vis it’s the admitted origin ישוע (Yeshua), where Ἰησοῦς (Iēsous), now Jesus, allegedly originated. It is noted that instead of justifying the English transliterated name Jesus, Yeshua, which is also an English transliterated name, as it is no longer in Hebrew or Aramaic letters, effectively disproves its validity, as Yeshua can also be accommodated in the language, as proper transliteration  of a masculine Hebrew or Aramaic name. Hence, the basis, albeit alibi, of the Greek translators to make masculine the ישוע (Yeshua) name into Greek name Ἰησοῦς is very deceptive. In short, nobody can justify the Jesus name as the name of the messiah to exist in the English language. Consequently therefore, there is zero basis for Jesus Christ name to be praised and worshipped in the English and in similarly situated languages.

The discussion ended with a conclusion that Ἰησοῦς (Iēsous), now Jesus, can only validly be connected to pagan god Zeus (/zjuːs/;[3] Greek: Ζεύς Zeús [zdeǔ̯s])[4]  and/or Dionysus (/daɪ.əˈnaɪsəs/; Greek: Διόνυσος Dionysos), its alleged Hebrew or Aramaic origin, being lacking of Israelite’s God divine name suffix or prefix Ya and based on the writers’ innovation to satisfy the grammar in the Greek language, but never to satisfy the truth regarding the messiah’s name. It is also based on the Greek translators’ propensity to reflect the name of Greek pagan god.

On the other hand, on biblical perspective, said deception can also be traced in the bible itself, the name Jesus being contradicted in the old testament by the transliterated name Joshua, which is the prophesied name of the branch (the messiah) referred in Zechariah 6:12 in relation to Zechariah 6:11, as quoted above.

Why the difference between the English names Jesus and Joshua?

It is because Jesus was transliterated from Greek name Ἰησοῦς (Iēsous) sourced from  Greek Septuagint, which was popularized by Philo of Alexandria and Josephus, while the name Joshua was transliterated direct from Hebrew scripture Tanakh, thereby exposing the deception in the Greek Septuagint. Biblically, however, Joshua is not completely correct, because it does not reflect the initial ‘Yah’ sound of the Father’s name, as in Hallelu-Yah (or Praise Yah), which is noted in Revelation 19. It merely reflects the ‘UHA’ baby’s cry sound that is a manifestation of life, as in ‘SHUA’, in a newborn, which is described in Matthew 21:16, as prepared praise, as follows:

16and they said to him, “Do you hear what these are saying?” And Yahushua () said to them, “Yes; have you never read, “‘Out of the mouth of infants and nursing babies you have prepared praise’?” (English Standard Version Revised)

Due to false teachings, the name of the Father was deceptively set aside by Catholic and Christian teachers, and instead, the name Jesus, which is just a creation by writers, was promoted to be believed as the name of God. Accordingly, therefore, the created Jesus Christ entity was made to exchange or replace the truth of God, more specifically the truth about His name. And because, many are worshiping and serving the said created Jesus Christ lie, the act is indeed a fulfillment of the prophesy cited in Romans 1:25, which says:

25For they exchanged the truth of God for a lie, and worshiped and served the creature rather than the Creator, who is blessed forever. Amen.( New American Standard Bible)

From the above discussion, it is clear that something must be done to restore in the scripture the life-giving names YAHUAH, the Father and YAHUSHUA, the son, the latter being the only way to the Father, at the same time, to reject the name Jesus (J-ZEUS), which is intimately connected to Greek pagan god’s names ZEUS and DIONYSUS, through suffix -sus.

By aaphil in The Word on March 9, 2018.
← Shocking truth about ‘Jesus Christ’ name Where did the names ‘Jesus’ and ‘Christ’ originate? →