Are Catholics and Christians acknowledging the messiah before others?

January 19, 2018 8:35 pm / 3 Comments on Are Catholics and Christians acknowledging the messiah before others? 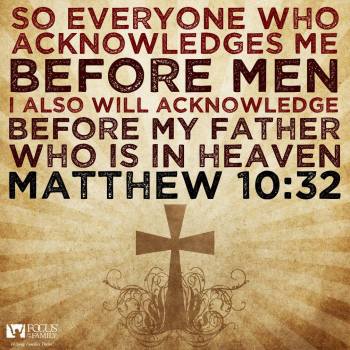 Kindly disregard the ‘cross’ deception in the posted image.(Image Source: Focus on the Family Facebook page)

Are Catholics and Christians really acknowledging the true messiah before others? The issue, which can be answered by a big NO, is very important because they are publicly professing that they are believers of Christ. More specifically, this is related to Matthew 10:32, which states: “Whoever acknowledges me before others, I will also acknowledge before my Father in heaven.” (Matthew 10:32, NIV).

It is a big NO because if the name Jesus Christ and his alleged image and all doctrines and practices being attached to him are products of evil deceptions, the said believers are, in effect, not acknowledging the true messiah before others.

Others may capitalize on the words found in the bible as sources of alleged truth. But, would they be enough when you attach or connect them to the identity of Jesus Christ, whose name did not ever exist when the messiah was here on earth? Of course, also, the answer is a big NO. That being so, the Jesus Christ entity is actually a traditional lie. And consequently, therefore, believers are dangerously gearing towards destruction or perdition and not END_OF_DOCUMENT_TOKEN_TO_BE_REPLACED

Who is the real author of Catholicism and present Christianity?

Politics and Religious beliefs have the same purpose-that is, to control the minds and wealth of other people

If Sabbath law is taken into account, who is the real author of Catholicism in particular and the present Christianity in general? Many will say that Jesus Christ is the moving force behind or the author. Could it really be true? With all due respect to Catholics and Christians, this can not be true, at all, because there was no Jesus name that ever existed when the messiah was here on earth. That being so, even if everybody would shout that the force behind these belief systems is him, it would simply fail because Jesus Christ is a fictitious entity who was just created by the bible.

Who is Jesus Christ by the way?

All those defending the name Jesus justify the name to have originated from Yeshua, which is an Aramaic name. However, assuming that said name is in Hebrew, which others claim to be, the theory of those defending the name to have originated from Aramaic or Hebrew does not deserve any merit because in so far as name is concerned, what applies is transliteration and not translation, when converting it from one language to another.

Transliteration is defined as follows:
From Wikipedia:

“Systematic transliteration is a mapping from one system of writing into another, typically grapheme to grapheme. Most transliteration systems are one-to-one, so a reader who knows the system can END_OF_DOCUMENT_TOKEN_TO_BE_REPLACED

Of course, the answer is expected to vary from one person to another. It is because, if you are a Catholic, born-again Christian, Methodist, protestant or member of other Christian sect, you will all definitely deny having ‘Jesus Christ’ delusion. In fact, all of you will definitely assert your respective truth, to the point of physically defending your alleged faith. However, because your doctrines and practices are too wide apart, it may only mean that only one of you is telling the truth and the rest are lying, END_OF_DOCUMENT_TOKEN_TO_BE_REPLACED

Christianity in general is a satanic cult

If you are a Christian and presented with an adversarial proposition, which alleges that Christianity in general is a satanic cult, what will be your reactions? Of course, they may range from hating to snubbing the proponent.

Jesus Christ had stolen the Words of God

But most probably, you will hate and curse him because your belief or religion or your person is allegedly being disrespected.

Or maybe you will be shocked or will just laugh and/or accuse the proponent to be crazy or anti-Christ.

On the other hand, you may realize that his intention is not for himself but for the sake of others who were deceived by traditional belief and that he hopes you to be healed from ‘Jesus Christ’ sickness, which started after letter ‘J’ that kills evolved in  English alphabet 500 years ago. But most probably, you will less likely believe that he is merely doing his job as part of his divine task to reveal the things that must be revealed, this time.

Either way, you may be in control of your emotions or no longer be controllable because you were allowed to traditionally believe on lies as the truth . (11 so God will allow them to believe lies with all their hearts, 12 and all of them will be justly judged for believing falsehood, refusing the Truth, and enjoying their sins. (2 Thessalonians 2: 11-12, TLB)) END_OF_DOCUMENT_TOKEN_TO_BE_REPLACED