As a source of human sufferings because of idolatry and “sodomy” or “oral sex” mentality, Roman Catholic Alleged Church was finally exposed by a United Nations body on its “oral sex” activities, which were manifested by sexual abuses of children by pedophile priests. 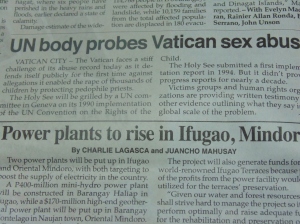 Its idolatry was traditionally called iconography, doctrinally using the name of Christ, Mother Mary and the Saints while the name of the Father, the Son and the Holy Spirit were deceitfully used to revere its cross by teaching followers to mandatorily make the sign of the cross when praying.

VATICAN CITY-Vatican faces a stiff challenge of its abuse record today as it defends itself publicly for the first time against allegations it enabled the rape of thousands of children by protecting pedophile priests.